After finally learning of the official ride date prior to the event, Jean Fisher and I were able to complete De Ronde / La Doyenne double! The ride date is never officially announced other than by code. Fortunately, someguy commented on my blog post from 2012 when we rode it in October that year as a self-navigated ride.

What are De Ronde, (aka Ronde PDX) and La Doyenne? Two unofficial organized rides in Portland that celebrate the Belgian classics – Tour of Flanders and Liege-Bastogne-Liege (La Doyenne – The Oldest). Each ride clocks in around 48 miles and 8,000 feet in climbing (according to Strava). This 2009 video gives a great overview of de Ronde.

Jean and I left Olympia around 6:20 am on Saturday. We arrived in Portland shortly after 8:00 am and parked on the fourth floor of the REI parking garage in in the Pearl District. $6.00 for all day. From here it’s about 3 or 4 mile ride to the ride start at the Pyramid Brewing Company in NW Portland. I suggest leaving yourself some time to find it.

The Official ride starts at 10:00 a.m. but we were early and noticed quite a few riders leaving early, so we decided to roll out around 9:30 and avoid the big crowd. Jean was sick with a nasty cold. I suggested she stay home, but that’s not her style. De Ronde begins with a 1,000 foot climb up an old logging road that’s partially paved and has a lot of gravel. At the top is Skyline Boulevard. We enjoyed this last flattish section. De Ronde has some 16 or 18 big climbs – two of them absolute brutes.

Brynwood Lane, which is 0.2 miles and averages 20% and has a maximum of 30%. I actually rode the entire thing – very slowly of course, and I used a couple driveways a quick reprieve. At the top was a lady with a bucket of gummy bears! Jean walks a bit and rides a bit. At the top of this and every climb she is hacking and talking of burning lungs. But gummy bears bring a nice diversion.

After lots of down and up, we came to mile 20 or so, and brute number two – College Street – a one-way road that looks more like a driveway and also a 20% average. Oh. And you ride the wrong way! I nearly made the top, but lost my mojo and walked the last 30 meters or so. While waiting at the top for a really long time I decided I better walk down to check on Jean. It was then I received a text. “My derailleur is bent, I can’t go any more.” Not exactly the words one wants to hear when out riding a bike!

Walking down was harder than riding up, so off came my shoes. Fortunately, it was just a chain derailed off the front ring and I was able to unjam it. Jean said she bent the derailleur back some and the chain was off the lower idler gear. I guess she ran out of horsepower and fell over on the drivetrain side. Not sure what happened, but it was not a catastrophe, so all is well. This time I rode from where Jean was in the last refuge 1/10 of the way up. So I road another 9/10! Jean completed her hike.

After College street, there is another little climb, then a descent to the house with beer and nachos. They ask for a small donation for charity – the pixie project (animal adoption and rescue). It’s legit, people are cool, so be generous.

From here it’s a lot more up and down as you climb to within reach of Council Crest, only to descend again. This keeps repeating until you think you can’t do it again. And finally, we reach our destination. It took us about 6.5 hours in all, but we enjoyed the Vistas.

From Council Crest it’s a 3-mile descent to downtown Portland and another mile to REI.

After refueling and rehydrating at the Deschutes Brewery Pub, we drove to Clackamas to spend the night. This would put us within arms reach of La Doyenne’s start – about 2-½ miles.

At 7:00 neither of us wanted to ride. Jean’s cough was worse and my body, and hers, felt horrible. But, we’re here, so we ate one of those nasty complimentary hotel breakfasts and set about to find the ride start.

We found the official start, which is at the intersection of SE Knapp and SE Flavel, where we found plenty of parking for free. We then found Cartlandia, which is where SomeGuy had suggested meeting for pre-ride coffee. We didn’t see someguy, but did talk to a couple cyclists and got directions to a grocery story so we could stock up on riding food, uncertain about rest stops or convenience stores. In the end there were a couple rest stops and some convenience stores. We even made the official ride start.

Climbing begins immediately up Strava segment “Death March.” A 1. 3-mile climb through Lincoln Memorial Cemetery. Jean’s lungs were burning again and she gave me the green light to go. I hesitantly said okay. She said she’d ride just a little ways and turn around. And we’re off. After ‘death march’ came what must have been a mile averaging 12%, followed by a huge descent at the same or steeper gradient to – you’re kidding me – a cul-d-sac!

And back up we go on a couple side roads. It was at this point I figured Jean might decide to cash it in. Little did I know, though I should, her tenacity.

La Doyenne is mostly a tour of suburbia, old and new. Jean and I were both riding our road gearing – 53/39 with 11/28 cassette. My climbing prowess leans a bit more toward willpower than finesse. On the super steep stuff I’m performing what mountaineers might call a rest step… where each pedal stroke results in a momentary pause for air. You could say I’m pedaling squares, but that might be giving to much credit toward good form. Next time it will be a compact, and possibly a larger cassette. We’d considered the cross bikes which would have been awesome for climbing, but we like our road bikes. 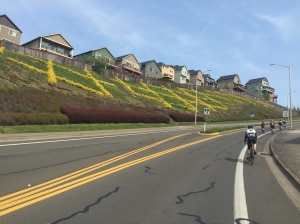 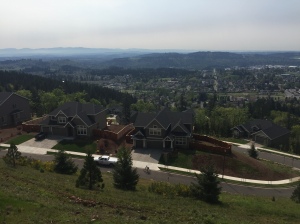 Around mile 31 came Hillcrest, otherwise known as Hellcrest. Another brute that’s about ½ mile up and varies from 12 to 20%. A few miles later comes Mount Scott. Again, another mile at over 12%. Up the big boulevard and then the Lion marker directs riders through the side of a gated community. Really? Okay. This time I’m weaving and barely making it. The top is another rest stop with more tales of suffering and camaraderie.

After leaving the summit there is a brief down before a kicker that nearly stops me dead. Some more climbing and around mile 37 I feel cramping…. Uh oh. Down more water, eat more food and then these words in the road…. Shut Up Legs! It worked!

For most of the day I’ve been leap frogging with other riders, generally in the same crowd, but after Hill Crest things spread out a lot. Now I’m with one other guy here and there. We keep each other company as we go into survival mode. I look at my phone periodically but no text from Jean. Little did I know she was riding it all.

I arrive back at the car after 4 hours-20 moving and 4 hours – 40 elapsed. I say hello to someguy and thank him for a great route. Someguy is very appreciative of the everyone who showed up and rode. His family and friends provided the rest stop support and asked for nothing.

After cleaning up, I begin the process of figuring out where Jean is. Using find-my-friends and using my phone as a hot spot to look at maps on my computer I see she is at mile 40. We eventually begin texting. I offer a ride. She sends choice words and at one point she states she’s not going one inch further. I have to mention that it’s the last climb. Jean gives in and completes the ride. Jean’s time is 5:37 ride and 6:20 elapsed. With a nasty cold and cough. 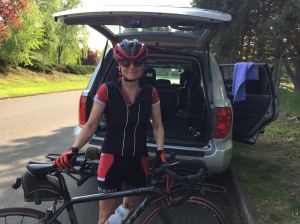 Riding sick has its advantages. Jean earned the Lanterne Rouge on the Mount Scott Climb. Her reward from SomeGuy– a one-hour massage. Not by SomeGuy, but Eric Fair Layman, LMT at Evolution Healthcare & Fitness.

For me personally, Monday morning had me feeling like a train wreck. Fortunately, I was able to get into to see Dr. Andy Rosser and RosserChiro. He got me standing a bit more vertical. I think  it will be a couple more days to recover from this.

Both rides are truly awesome and have their unique flavor. Each can be ridden outside of the official day. De Ronde is a little tougher to self-navigate but it’s possible. I’d say De Ronde is more scenic and generally interesting. La Doyenne is no slouch, and in many ways tougher. With periods of flat riding, it means the climbs are steeper and longer.

For anyone wanting to do this ride. It’s a must to watch the www.rondepdx.com in March. The date is nearly always in code. This year it was exactly two weeks after the Tour of Flanders and I think that is becoming a tradition.

All written content and images presented on this site are the original work of Ron Jones (explorerron and ronald jones photography). Copyright © Ronald Jones, with exception of royalty-free images which are captioned with name and source. All rights reserved. No material shall be copied, reproduced, or used by any person, organization, company, or corporation without obtaining explicit written permission to, and including, remuneration in an amount defined by Ron Jones (site owner). Tumwater, Washington.