3x to get 3rd
This would be my third time racing IVRR in 5 seasons. The first time I was dropped on Michigan, chased on then dropped on Manners. 2 years later I made the first 2 climbs and failed the second time up Michigan. While I felt I’ve been climbing rather decently this year, I was not all that confident going into the race. My warm up which included riding the first pitch of Michigan didn’t much for boosting confidence either. I knew that racing would bring out a little extra and decided to keep with forward positive thoughts… dreaming of leading the pack over the top with a little in reserve 🙂

OOA Represented by 3
Representing OOA in the 40+ field was Kyle, Jason C and myself. We were sure to get to the start early so as to be near the front. It paid off, because we were in-the-front. Normally I don’t like to be in front during the neutral roll-out when it is longish because I consider it as energy wasted. I was looking at this race differently though. As I’ve been gaining race confidence, even during times of doubt, I’ve been finding I want to take the race to others more and more. Kyle and I road side-side-by-side at the front until the pack was well established on Michigan. This actually served as a better warm up for that first hill that arrives oh so soon in the race.

The Michigan Test
We were in the top 5 or 7 hitting the first pitch. By midway through the straight before the road bends left I found myself 2nd wheel. I had a bit of reserve and considered laying it down, but decided the energy was better conserved at this point. I led the downhill which I like doing. It is so much safer. Mostly gruppo compact at the bottom on Lincoln Creek. On the back side through the small rollers I put in efforts now and again, figuring as long as I don’t go too deep, I’ll be okay, but others will have to go just that little bit faster and it will hopefully wear on a few just a bit. The team did a great job of staying near the front.

From Manners to Michigan
Manners was, well….Manners. Once again I led the downhill. The pack settled down for Independence Valley. Not too many antics. The pace picked up on Michigan, guys trying to win it on the 2% grade I guess. Kyle and I stayed attentive and in the top 5 to 10. On the steep pitch I was stuck behind a rider not keeping pace and throwing his bike all over the place. “Battling his machine” as Paul Sherwin would say. Kyle came up on my left and hooked a hand under my armpit and gave me a small tug out and around this guy; not too hard just more of a, come on, get up here and get to business. The tug was a huge boost mentally. It also meant I had to dig really, really deep if necessary. I was worried that an effort like that can really zap energy. Earlier I had mentioned to Kyle that if I felt as good the 2nd time up as I did the 1st I’d try to dish out some punishment. I wasn’t quite as strong the 2nd time up, or others had kept a bit in reserve. Nevertheless, I found staying with the leaders to be tough. Two got a few seconds up the road and there were maybe 8 with a small split. We chased and I led the downhill again where we caught the threat at the bottom. It was looking like we had a split of maybe 10 guys and I tried to get some rotation going, but it faltered and we were about 20… best guess. I got the group to rotate through a couple times, sort of and no sign of Kyle. Dang, I am going to owe him big time now. I better make good with his assistance.

No Manners on Manners
Along Lincoln Creek I tried not to burn too much. It was obvious though that guys were tired.. some anyway. We rolled into Manners and the same two from the Michigan attack shot off. Come on guys, we’re hurting here! I jumped to chase and quickly realized I was going to go too deep and settled in. We shed a handful here I believe.

The Final Rest
A few antics once back on Independence Valley, but it quickly sputtered until about 3K when Mr aggressive shot off again. At first it seemed like the move, but it didn’t take long to realize he’d be swallowed and spit out in plenty of time I think we caught him around 1.5K.

Final Kilometer
At 1K we had the whole road but we weren’t using it… at least not the first 5 guys. I was just trying to stay attentive, riding left side, somewhat sheltered but also offset and taking a little breeze so as to stay out of trouble and be able to quickly jump with any move. When I notice Fisher Plumbing shaking his legs and then someone else too I thought…good, because my legs are doing great.

Final 200
A couple changes of pulls and then the 200 meter sign. I could sense the nervous energy. I had not really marked the spot on lap one. Big mistake. Just past 200 I jumped and decided I’m all in. I got the gap, had a great gear and was powering away, then I could see the finish was still a ways off. I sat down, got low and kept on the gas. The white line is getting closer, this could be it, then (silent expletive), I’m now 2nd place on the road, back out of the saddle, passed again (silent expletive), now I’m 3rd, (I am not going to get 3 4th’s in a row) and held on for 3rd overall. Sweet!

For a while there I was 2nd place. Tim Reinholtz from Fanatic who won the sprint was DQ’d, which put me into 2nd. He was able to protest however and I was put back to 3rd, but not before we got the podium shot. Which was followed by the real podium shot. 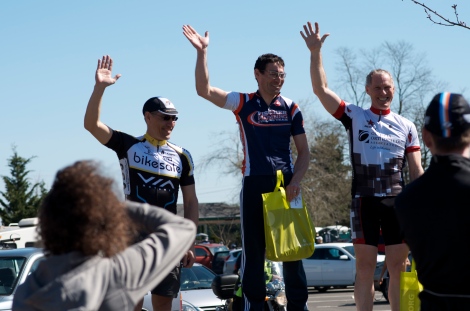 Lessons:
Pay closer attention to the sprint distance on early laps. I usually do, just not this time. A little more patience might have resulted in a win. But, I’m not really second guessing my decision. I had to go with my gut. I’ve held back before and ended up out of contention completely.

Final Thoughts:
To place at IVRR is a big boost for the confidence, especially when it wasn’t a matter of just sitting in.
Boy, do I owe Kyle! Thanks man. Looking around and seeing teammates at the start line and knowing they are going to give their all is also a boost. It is a great motivator. Can’t wait to race with Kyle and Jason again.

Post Race
After the race Jean and I decided to head to Centralia for some food and leisure. I’ve decided that devoting all this time on the bike and to racing needs to be accented by some relaxation.

A nice lunch outside at the Olympic Club, a coffee at Santa Lucia, some English train spotting (?), a handful of antique stores and a walk in Central Park!!! Centralia is home to the largest Historic Fox Theater between Tacoma and Portland I guess. It’s being renovated, but open. And then there was this high-heeled chair ~. Whatiyadowiththat? The motorized Podego bikes were kind a neat. We didn’t ride them. 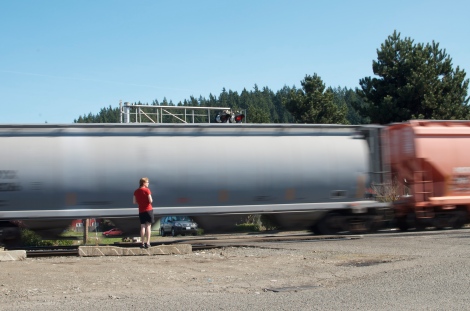 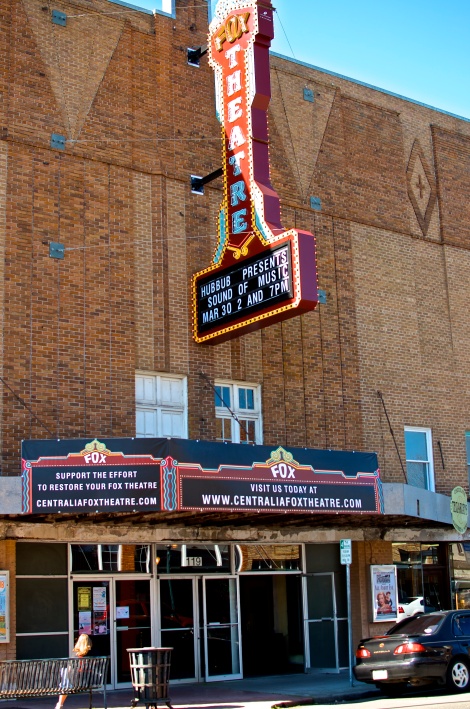 All written content and images presented on this site are the original work of Ron Jones (explorerron and ronald jones photography). Copyright © Ronald Jones, with exception of royalty-free images which are captioned with name and source. All rights reserved. No material shall be copied, reproduced, or used by any person, organization, company, or corporation without obtaining explicit written permission to, and including, remuneration in an amount defined by Ron Jones (site owner). Tumwater, Washington.